The most reliable release mechanism with exceptional low spillage rage. Safety at its best. There are two types of release mechanisms for our breakaway couplings.
Breaking pin
The breakaway parts hold together by three breaking pins. Each pin has a
calculated weak point that will break at a certain force decided for each
application. To release the breakaway the strength of the pin needs to be
exceeded. This could be caused by internal pressure and/or forces applied either from, bending plus pulling (industrial type) or only pulling (marine type). Typical installation using industrial type are when one end is fixed to a pipe or mounted on a truck or a railcar and with the other end connected to a hose. The break-away will be released by a force attached from any possible direction.
The marine type is typically mounted with a hose string on both sides and where you want the breakaway to be resistant of releasing by bending forces – released by straight pull.
Cable release
Is released by pulling a wire connected to a ring that hold the breakaway
together. The release force is more independent from the internal pressure or
pulling and/or bending forces. Typical installation is on loading arms or when a wire shorter than the hose can be practically arranged at the installation. When resetting the cable release version, no spare parts is needed. 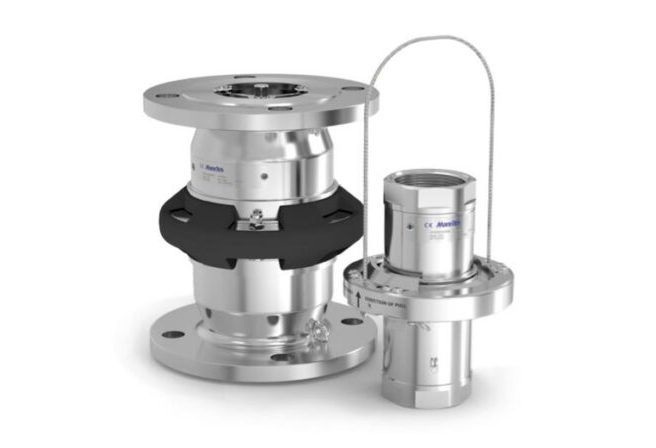